What is System Design? Types of IP Addresses, OSI models, and TCP/UDP Protocols.

The topic of system design has intrigued me over the last couple of months, So I finally started learning basics of system design by reading through a few blogs which have been recommended to me.

Almost all of them start by explaining about some of the basics of IP, The OSI Model, and TCP/UDP Protocols. All of these topics may sound too basic and redundant to start with, But they are very important in the overall understanding of system design concepts.

So let's get started.

What is system design?

You've probably heard the phrase "system design". But let's talk about what exactly is system design.

System design is the process of defining the architecture, interfaces, and data for a system that satisfies specific requirements. System design meets the needs of your business or organization through coherent and efficient systems. It requires a systematic approach to building and engineering systems. A good system design requires us to think about everything, from infrastructure all the way down to the data and how it's stored.

Why is System Design so important?

System design helps us define a solution that meets the business requirements. It is one of the earliest decisions we can make when building a system. Often it is essential to think from a high level as these decisions are very difficult to correct later. It also makes it easier to reason about and manage architectural changes as the system evolves.

In essence, IP addresses are the identifier that allows information to be sent between devices on a network. They contain location information and make devices accessible for communication. The internet needs a way to differentiate between different computers, routers, and websites. IP addresses provide a way of doing so and form an essential part of how the internet works.

Now, let's learn about the different versions of IP addresses:

The original Internet Protocol is IPv4 which uses a 32-bit numeric dot-decimal notation that only allows for around 4 billion IP addresses. Initially, it was more than enough but as internet adoption grew, we needed something better.

IPv6 is a new protocol that was introduced in 1998. Deployment commenced in the mid-2000s and since the internet users have grown exponentially, it is still ongoing.

This new protocol uses 128-bit alphanumeric hexadecimal notation. This means that IPv6 can provide about ~340e+36 IP addresses. That's more than enough to meet the growing demand for years to come.

A public IP address is an address where one primary address is associated with your whole network. In this type of IP address, each of the connected devices has the same IP address.

Example: IP address provided to your router by the Internet Service Provider(ISP).

A private IP address is a unique IP number assigned to every device that connects to your internet network, which includes devices like computers, tablets, and smartphones, which are used in your household.

Example: IP addresses generated by your home router for your devices.

A static IP address does not change and is one that was manually created, as opposed to having been assigned. These addresses are usually more expensive but are more reliable.

A dynamic IP address changes from time to time and is not always the same. It has been assigned by a Dynamic Host Configuration Protocol (DHCP) server. Dynamic IP addresses are the most common type of internet protocol address. They are cheaper to deploy and allow us to reuse IP addresses within a network as needed.

Example: They are more commonly used for consumer equipment and personal use.

The OSI Model is a logical and conceptual model that defines network communication used by systems open to interconnection and communication with other systems. The Open System Interconnection (OSI Model) also defines a logical network and effectively describes computer packet transfer by using various layers of protocols.

The OSI Model can be seen as a universal language for computer networking. It's based on the concept of splitting up a communication system into seven abstract layers, each one stacked upon the last.

Why does the OSI model matter?

The Open System Interconnection (OSI) model has defined the common terminology used in networking discussions and documentation. This allows us to take a very complex communications process apart and evaluate its components.

While this model is not directly implemented in the TCP/IP networks that are most common today, it can still help us do so much more, such as:

The seven abstraction layers of the OSI model can be defined as follows, from top to bottom: 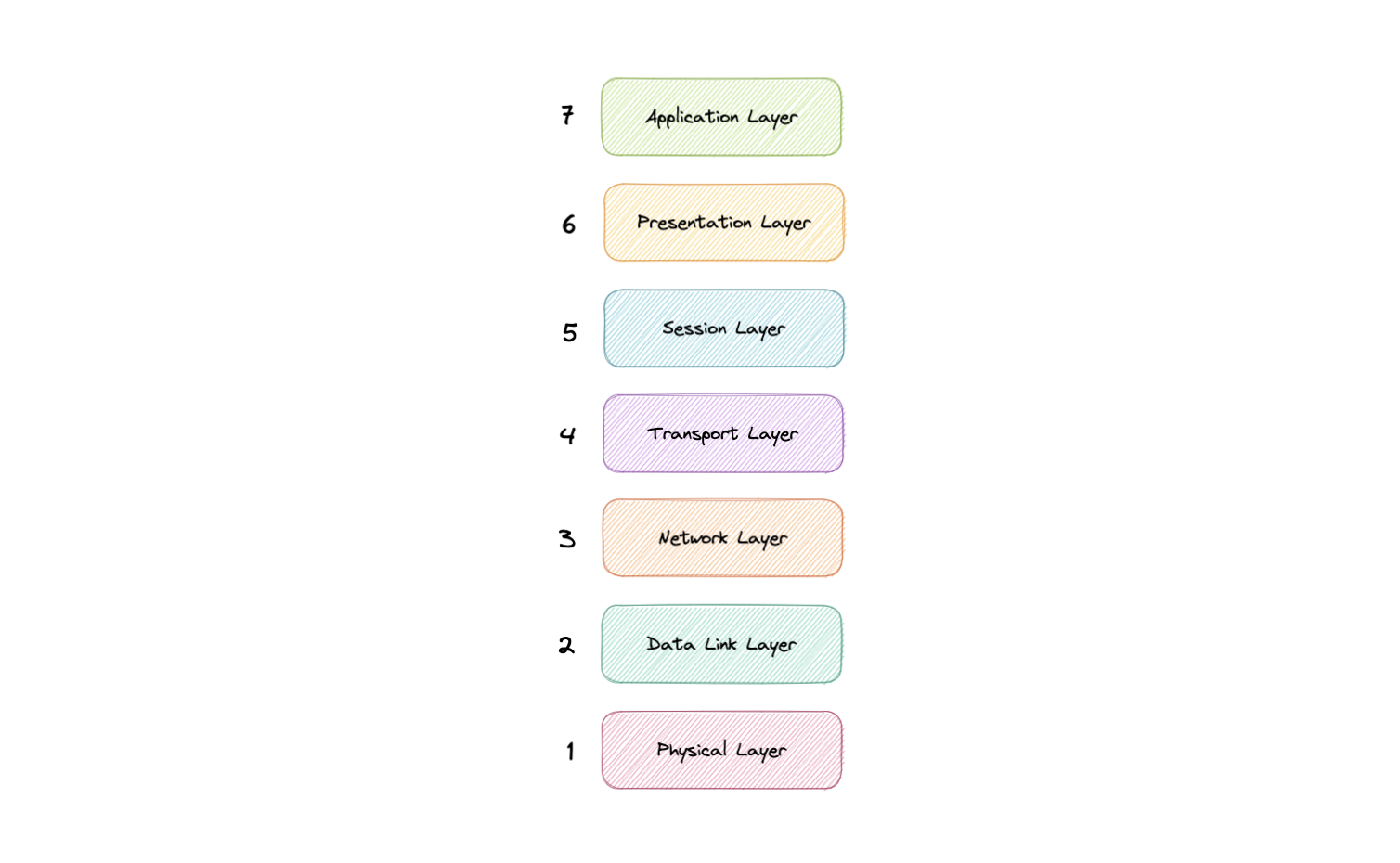 The transport layer (also known as layer 4) is responsible for end-to-end communication between the two devices. This includes taking data from the session layer and breaking it up into chunks called segments before sending it to the Network layer (layer 3). It is also responsible for reassembling the segments on the receiving device into data the session layer can consume.

The network layer is responsible for facilitating data transfer between two different networks. The network layer breaks up segments from the transport layer into smaller units, called packets, on the sender's device, and reassembles these packets on the receiving device. The network layer also finds the best physical path for the data to reach its destination this is known as routing. If the two devices communicating are on the same network, then the network layer is unnecessary.

This layer includes the physical equipment involved in the data transfer, such as the cables and switches. This is also the layer where the data gets converted into a bit stream, which is a string of 1s and 0s. The physical layer of both devices must also agree on a signal convention so that the 1s can be distinguished from the 0s on both devices.

Transmission Control Protocol (TCP) is connection-oriented, meaning once a connection has been established, data can be transmitted in both directions. TCP has built-in systems to check for errors and to guarantee data will be delivered in the order it was sent, making it the perfect protocol for transferring information like still images, data files, and web pages.

But while TCP is instinctively reliable, its feedback mechanisms also result in a larger overhead, translating to greater use of the available bandwidth on the network.

User Datagram Protocol (UDP) is a simpler, connectionless internet protocol in which error-checking and recovery services are not required. With UDP, there is no overhead for opening a connection, maintaining a connection, or terminating a connection. Data is continuously sent to the recipient, whether or not they receive it.

It is largely preferred for real-time communications like broadcast or multicast network transmission. We should use UDP over TCP when we need the lowest latency and late data is worse than the loss of data.

TCP is a connection-oriented protocol, whereas UDP is a connectionless protocol. A key difference between TCP and UDP is speed, as TCP is comparatively slower than UDP. Overall, UDP is a much faster, simpler, and more efficient protocol, however, retransmission of lost data packets is only possible with TCP.

TCP provides ordered delivery of data from user to server (and vice versa), whereas UDP is not dedicated to end-to-end communications, nor does it check the readiness of the receiver.

In the next blog, I will try to cover more about Domain Name System (DNS), Load Balancing, Clustering, etc.

Feel free to comment on how did you like my first blog on the system design series or shoot me a mail at connect@nandan.dev If you have any queries and I will try to answer.

You can also visit my website to read some of the articles at https://nandan.dev/

Stay tuned & connect with me on my social media channels. Make sure to subscribe to my newsletter to get regular updates on my upcoming posts.

Did you find this article valuable?

Support Nandan Kumar by becoming a sponsor. Any amount is appreciated!